Who the Clix? Scream 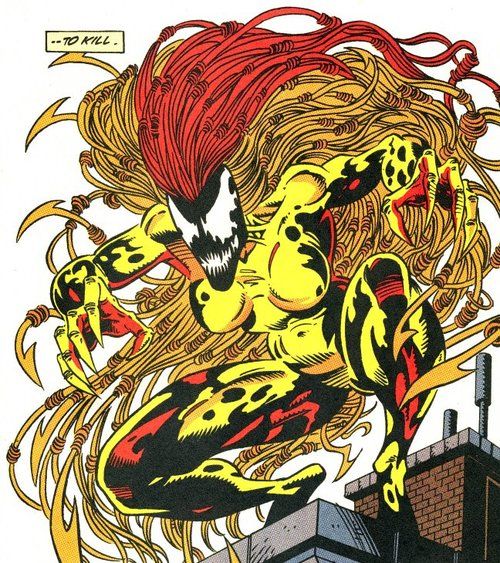 Donna Diego is a volunteer for the Life Foundation, a survivalist group made up of members of the American government preparing for what they believe will be the mutually assured destruction as a result of the Cold War. They also seek to provide a comfortable life in fallout shelters for wealthy clients in the nuclear hellscape they believe will soon arrive. The Life Foundation is able to defeat and capture Venom before separating the symbiote from its host, Eddie Brock. Carlton Drake then experiments on the Venom symbiote and forcefully spawns five symbiotes from it in an effort to create “super-cops” for the fallout shelters. One of these symbiotes bonds with Donna and they begin calling themselves Scream.

Scream terrorizes a shopping mall near Salinas, California where she encounters Spider-Man. The webslinger is able to best her quickly leading to her escaping in a hovercraft. Unbeknowns to her, Spider-Man rides along and finds the Life Foundation headquarters as well as his old frenemy Eddie Brock. Spidey helps Eddie escape and Brock rejoins with the Venom symbiote before Scream and the other symbiotes attack. Venom turns an aging device on them and seems to turn the symbiotes to dust before the Life Foundation self-destructs their base.

Unbeknownst to Venom and Spider-Man, Scream and her siblings survive. They are disowned by the Life Foundation and travel to New York in hopes that Venom will teach them how to control their symbiotes. Venom tells Scream he wants nothing to do with them before the two fight. Venom manages to disappear, leading to Scream enlisting the Scarlet Spider to help her find Venom. Scarlet Spider also refuses which leads to Scream having a psychotic break and rampaging through Times Square. Venom arrives to stop her and manages to rip pieces of her symbiote off of her, embarrassing her. The Scarlet Spider stops Venom from trying to kill Scream's symbiote and she flees.

Some time later, Eddie rejects the Venom symbiote during an imprisonment. Scream and her siblings break Brock out of prison only to take him prisoner themselves. Scream again implores Eddie to help them learn how to control their symbiotes but he refuses. Eddie manages to get away and soon after, each of the other symbiotes begins to die. Scream convinces the living symbiotes that Brock is the killer. She almost convinces them when it becomes too much for her to handle, and she reveals that she had been killed the others. She believes the symbiotes are evil and anyone that bonds with one deserves to die. When one of her siblings tries to convince her that it's just the symbiote's influence, she confesses that she had heard voices long before becoming Scream. She kills the last of her siblings and is going for the kill on Eddie when the Venom symbiote returns and saves him. Determined not to kill anymore, Venom incapacitates Scream and allows the authorities to take her in.

After the symbiote invasion of Earth, Scream begins tracking down good symbiote hosts and tries to help them learn how to cope. However, those she helps begin to mysteriously die. Eventually she, and Venom, learn that it is a Xenophage, a huge alien that devours symbiotes and their hosts' brians. Scream and Venom defeat the Xenophage but she is deeply injured in the conflict. After recovering, she seeks out and finds the Xenophage's ship and hopes that it will help her in her benevolent work. The ship transports her, Venom, and Wolverine to another dimension. There they battle the mutants Dirtnap and Chimera who are able to wound Scream again.

Some time later, she begins investigating the murder of the symbiote hero Hybrid. She is found by Eddie Brock, who has no symbiote, and captured by him. Brock incapacitates the Scream symbiote with a sonic device and then murders Donna.

The Scream symbiote, which is bonded to Donna's corpse, is resurrected by Knull and begins helping Carnage harvest the codices of previous symbiote hosts. Patricia Robertson, who had been a host of a clone of the Venom symbiote, attempts to ambush Scream. Scream, however, decides to bond with her and overpower Patricia's personality, leaving Donna's bones behind.

While hunting down Andi Benton, a friend of Flash Thompson that had hosted a piece of the Venom symbiote, Patricia convinces the Scream symbiote to resist Knull and dies in the process. Scream leaves its second corpse host and latches onto Andi, who has been placed alive on a meat hook. Using the symbiote to get down, Andi feels the symbiote healing her wounds and revels in the power. She can feel the Scream symbiote's voice as well as Carnage, but refuses to be bossed around. She attacks Carnage, only for him to overpower her and impale her with his spiked hand. She is able to counter attack with her long symbiote hair and cocoons Carnage before throwing him in a meat locker and fleeing for help.