Who the Clix? Alopex (IDW) 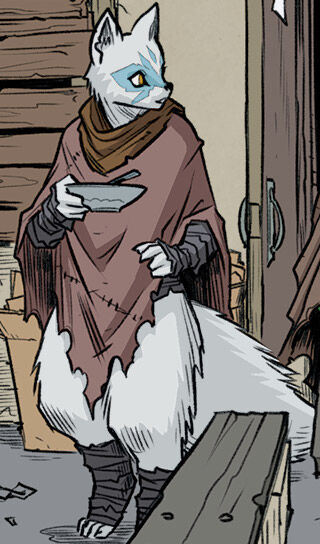 Alopex began her life as a regular artic fox in Fairbanks, Alaska. She is a feared hunter and respected in the wilderness she calls home. One day, she is captured by a group of scientists. They experiment on her in hopes of granting her human intelligence. Alopex proves an even greater success than they anticipated when her body also mutates into a humanoid form. The Foot eventually come for the scientists' work and the Shredder personally recruits Alopex into the clan.

The first time she meets any of the Hamato Clan, she attempts to trick Raphael into revealing the location of their lair. Raphael recognize her ruse and the two battle before she retreats in defeat. She goes on to battle Raphael and the other Turtles several times as a loyal member of the Foot Clan.

Shredder recognizes that Alopex retains some emotional bonds to her home and animal family. He sends her back home only to burn down the forest as a test of loyalty. This enrages Alopex and she attacks him, only to be swiftly defeated. With her life in his hands, Alopex surrenders and submits to the Shredder's complete authority. In her mind though, she decides on that day to eventually kill the Shredder and avenge her family.

During a heated battle between Shredder and Splinter, Alopex makes her move and tries to kill Shredder. She is foiled in this attempt when Oroku Karai shoots her in the arm with a bow. Alopex escapes and follows the Turtles to the O'Neil farm. She skulks around the woods around the farm until Raphael notices her and attacks her, believing her to be a Foot assassin. Leonardo intervenes and the brothers are not sure how to proceed. Alopex explains all that has happened and in turn, Splinter offers her a truce. Alopex initially rejects the help of the Hamato Clan but remains in the woods near the farm for some time after until she joins them officially. Their new alliance is tested when a group of Foot assassins attack the farm and Raphael is sure that Alopex is still loyal to Shredder. It is only when Alopex saves Raphael's life that he realize she really has changed her ways.

Under the influence of the demi-god Kitsune, Alopex returns to New York and watches Angel Bridge from a distance. She eventually asks for Angel's help in battling Bebop and Rocksteady to help the Turtles and they prove successful. Old Hob offers Alopex a place in the Mutanimals. Alopex rejects the mutant cat and chooses work alongside the human Angel.

When Splinter becomes master of the Foot Clan, Alopex helps Leonardo train new recruits while also working with Angel, aka Nobody, and Harold. Alopex remains unaware of Kitsune's influence over her until the demi-god makes her move and tries to have Alopex kill Splinter. Panicked by the loss of control, she flees back to her old home in Alaska.

Raphael and Nobody track Alopex down as the poor fox is tormented by Kitsune's taunts. Raphael is able to forge a psychic link with Alopex and give her spirtual support so that she can break Kitsune's control once and for all. She returns to New York and aids the Turtles in the ensuing gang wars as well as the attempt by Kitsune to resurrect her father, a powerful and ancient dragon god.

After Old Hob's mutant bomb, she is currently living in mutant town and trying to help feed the poor and disenfranchised new mutant citizens. She has grown tired of Raphael's nightly patrols, as he uses them to avoid having to deal with the emotional loss of his father.