Who the Clix? Blastaar 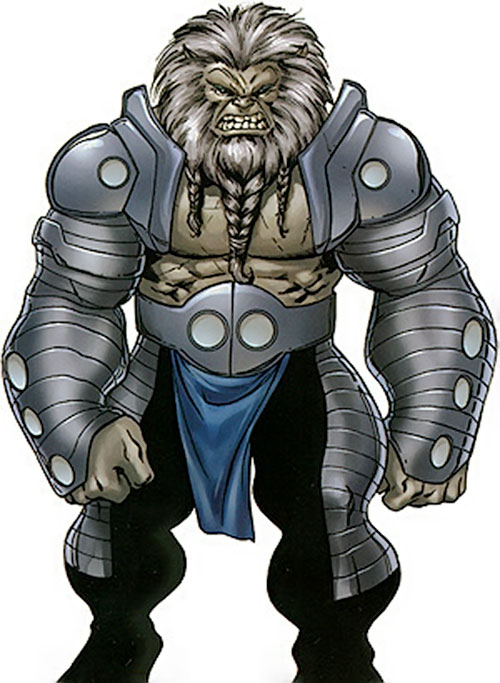 Blastaar and his people the Baluurians come from the planet Baluur in the Negative Zone. Descended from a long line of royals, Blastaar rules his people with an iron fist until they ultimately rebel and depose him. They lock Blastaar in an advanced suit and send him off into the unknown depths of the Negative Zone. Luckily for Blastaar, he happens across Reed Richards and Triton and is able to follow them back to the planet Earth. While on Earth he battles both the Sandman and the Fantastic Four before being send back to the Negative Zone by Mr. Fantastic.

While he returns to the Earth several times to battle the Fantastic Four, Avengers, and even Thor, he eventually succumbs to a mysterious coma. Professor Paxton Pentecost is able to revive him and forces him to fight for him. Blastaar battles both the Human Torch and the Hulk before being imprisoned in adamantium and sunk to the bottom of the ocean. When Blastaar is ultimately freed from this horrifying prison, he immediately battles the Inhumans and is ultimately defeated again.

When he eventually returns to the Negative Zone, he forges the first of many alliances with Annihilus and attempts to reclaim his lost throne. They also use the Super-Adaptoid and are forced to battle both the Thing and the Avengers, summoned by Blastaar's wife. Blastaar ultimately succeeds in taking back his birthright only to begin conquering the Negative Zone, which brings him into conflict with his former ally, Annihilus. Blastaar later leads a fleet of warships to Earth and is successful in capturing Mr. Fantastic before freeing Annihilus, hoping his old ally would be grateful. Instead, Annihilus battles Blastaar for the right to conquer the Earth before Blastaar's subordinate, Tanjaar, betrays him and leaves the villain paralyzed.

Blastaar is later found in the Negative Zone fully healed by the Eternals. Blastaar and the Eternals battle but he is ultimately defeated by the help of the Avengers.

During the assault of the Annihilation Wave, Blastaar helps Nova in his attempt to kill Annihilus. He also leads a group of Kree soldiers in war against the Phalanx, only for the group to be defeated. The Phalanx tortures Blastaar until he appears to die. However, this death is merely a very deep hibernation that Blastaar can control and thus he fools his captors into abandoning him.

Blastaar suceeds in becoming the king of the Negative Zone and sets up his base in Negative Zone Prison Alpha. Talon and Razor later arrive and offer him the Cosmic Control Rod. In exchange, they want Blastaar's help in the war of the kings between the Shi'ar and Inhumans. He later loses the prison back to the US Government's super-forces.

He still retains his title as king of the Negative Zone and makes a deal at Nova's behest to recognize the authority and jurisdiction of the Nova Corps. He later aids the amassed forces that battle off the invasion from the Cancerverse. He proves himself a powerful, yet annoying, ally until he feels that the battle is lost and pulls his forces back. Feeling that this strategic choice left him in a powerful position, Blastaar tries to usurp Medusa as ruler of the combined Kree, Shi'ar, and Inhumans. Though he is successful in besting Medusa in battle, he is quickly dispatched by the Annihilators back to the Negative Zone.