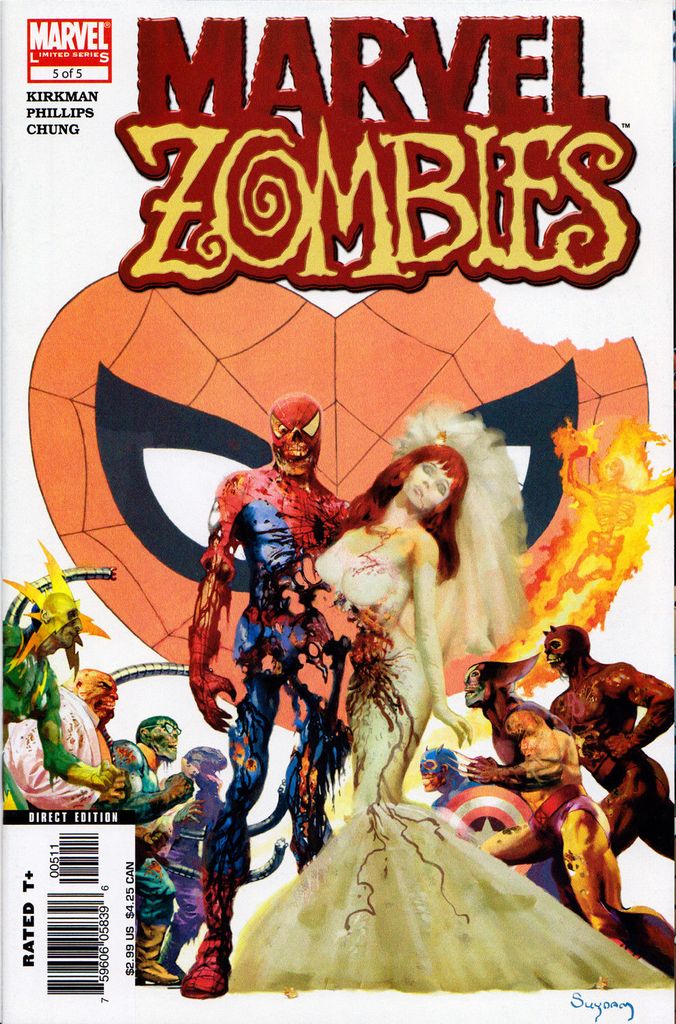 On Earth-2149, a Sentry from another dimension plummets to Earth. He complains of being driven by the hunger and is unknown by the heroes of this Earth. With his incredibly strength, even in light of the disease, he assaults and infects many of the heroes that try to stop him. They, in turn, begin to infect other super-heroes and villains while simply consuming most regular humans. They also tend to retain their intelligence and memories, having a crushing moment of clarity when they are full. This affects some heroes more than others, such as Spider-Man, who has to face the memory of eating Mary Jane and Aunt May every time his hunger is sated. When the need for flesh grows too strong, all the zombies tend to become far more feral and are almost impossible to deal with. This has led to the zombies running out of food after eating all human life on Earth.

The zombified Reed Richards uses his time while full to repair a communications device and reach out to other Reeds across the multiverse. The Ultimate Reed Richards is the first to hear the signal and with the other Reed's help, builds an inter-dimensional portal. With it, he journeys to the zombieverse, only to realize his mistake when he is attacked. The zombie Fantastic Four cross over to the Ultimate universe but are captured before they can cause too much trouble. Magneto, who has not become a zombie yet, aids the young Reed Richards into returning home and destroys the portal. He hopes that this will stop the zombie plague from spreading into other universes.

In the Ultimate Universe, the zombie FF try to break free as the Hunger continues to drive them. After Johnny Storm is infected by a demon from the N-Zone, Reed seeks help from Dr. Doom. Through a complicated series of events, Doom becomes the host of the demon, the zombies break free, and Doom is able to open a portal back into the Zombieverse. He pushes the zombies back into their home dimension and follows, making sure that no one can come back through to threaten the Ultimate universe again.

Back in the zombieverse, Magneto is attacked by the other zombie heroes and beheads Hawkeye before cutting half of Colonel America's skull off, exposing his brain. The zombies then overpower and devour Magneto. They are so hungry that they don't leave enough of Magneto to be resurrected as a zombie. Almost immediately, the Silver Surfer arrives and informs the zombies that his master Galactus is on his way and will be devouring their planet shortly.

The zombies respond by attacking and eating the Silver Surfer.

Empowered by a portion of the Power Cosmic, these zombies begin eating the other weaker zombies. Though zombie flesh tastes horrible to other zombies, it gives just enough sustenance for them to remain sane enough to plan for the arrival of Galactus.

Elsewhere, the Acolytes come down from Asteroid M to search for Magneto. In their search, however, they find a still living Black Panther who is missing some of his limbs. Black Panther informs them that Giant-Man is keeping him alive and eating a piece of him at a time, so that he can continue research. The Wasp, who did not know about Black Panther, begins arguing with her husband for holding out on her. Giant-Man responds by biting Wasp's head off and spitting it out. Giant-Man is called away by more pressing matters, leaving Black Panther to observe Wasp's still sentient head begging for human flesh. It is at this point he reasons that the hunger is a psychological disease more than an actual physical desire. And so he thinks the zombies may be able to be controlled or cured. After a fashion.

Galactus arrives and begins his process of devouring the Earth. The Cosmic Zombies attack him but are easily repelled by his greater power. Giant-Man, Iron Man and Bruce Banner are able to finish a device that amplifies their own cosmic powers and actually injure Galactus. Several villainous zombies attack, trying to feed off of Galactus only to be repelled by most of the “hero” zombies. Though Colonel America is lost in the battle, the remaining Giant-Man, Hulk, Iron Man, Luke Cage, Spider-Man and Wolverine are able to feed on Galactus and become the cosmically empowered Galacti.

Five years later, Black Panther, the Acolytes, and the Wasp, with her head in a jar on a robot body, return to Earth and find it completely devoid of any humanoid life. In another galaxy, an alien race sees the signs of the coming of Galactus in the night sky. This soon reveals itself to be the Zombie Galacti, who begins a feeding frenzy.

After 40 years of eating all sentient life in the universe, the Galacti return to Earth in hopes of accessing other universes. They are shocked when they discover New Wakanda, with fresh food...er...humans. The two forces face off with the Zombie Hulk going on a rampage that kills several of the zombies and results in his own death. The remaining zombies are teleported to parts unknown.

Coming through the Nexus of Realities, zombies invade the 616 universe. Machine Man and Jocasta return to the Zombieverse in hopes of obtaining a blood sample from an uninfected human that they hope will stop the zombie plague. A zombie Morbius, posing as the regular one, is actually planning on using this blood to spread the infection. This is also the origin of Headpool, after zombie Deadpool's body is destroyed.

The real Morbius, having destroyed his zombie counterpart, assembles a new team of Midnight Sons to hunt zombies that have escaped into the multiverse. At the same time, Dormammu uses the Hood to try and obtain the virus for his own plans. This ultimately fails, however, as all the zombies are killed except for Headpool.

Elsewhere and elsewhen, the Galacti arrive on Earth-Z. The usual carnage follows with much of the populace trying to fight off the zombie menace. This ends slightly differently, however, as the zombie heroes encounter a schism. Two zombie Avenger teams are formed with competing desires. One is led by Spider-Man, one of the original zombies, who wants to stop their hunger and end the plague in this reality. The other is led by the Sentry, who wants to continue eating and spread the plague across the multiverse. After a great battle, the Watcher of this universe sends the Sentry back across time and space to the original Zombieverse. In doing so, he believes he has created a closed loop, where Sentry infects the original universe which comes and eventually infects this universe. However, the death of two universe is a small price to pay to save the Multiverse from the Hunger.