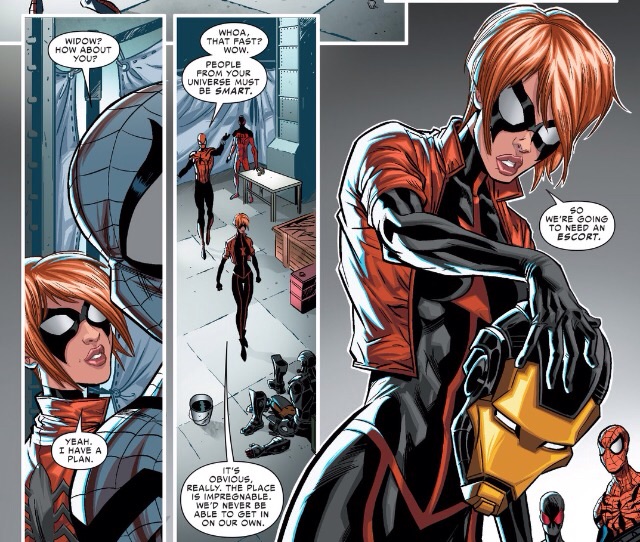 Black Widow is a clone of Peter Parker, manipulated to be female. She is created alongside Kaine and both are expected to act as agents of the CIA. Black Widow is originally given the code name of Spider-Woman and she retains all of Peter's memories and love of Mary Jane Watson, believing herself to be Peter Parker. After Spider-Woman and Kaine meet Peter, Doctor Octopus reveals that he was behind the project and had intended to erase the clones memories and create new ones. Unfortunately, the clones escaped before he could follow through. All three battle and ultimately defeat Doctor Octopus as SHIELD arrives. Peter surrenders to Nick Fury while the clones choose to not become science projects or pawns in another agency's plans.

Black Widow appears during the Ultimatum, helping Johnny Storm capture the Vulture. Johnny develops a crush on her without realizing that she's the clone of his friend. Widow and Johnny meet May Parker while rescuing citizens from Magneto's worldwide attack. She also aids Doctor Strange and the Hulk at Strange's home, which is under attack by Nightmare. The Hulk destroys a portal to the Dark Dimension that results in a massive explosion and confuses him long enough that he chases Black Widow through the terrorized New York. She escapes Hulk and finds Kitty Pryde and the two search New York for Peter, only to find a remnant of his mask.

Widow later does recon on the Roxxon Corporation in regards to possible illegal genetic experimentation. A creature destroys the building she is spying on and later attacks her. Determined to find out what the company is up to, Widow poses as an employee and is quickly introduced to the Roxxon Brain Trust. During this meeting, they all witness an attack on the Baxter Building and they are moved to an underground bunker. While there, Misty Knight begins to question them and sees through Widow's disguise. Before Knight can reveal her, the Brain Trust reveals that they think Roxxon is actually behind all the attacks. They ask to see her powers and she attempts to flee only for one of the Brain Trust members to transform into a brutish monster and knocks her out.

When she wakes up, she is bound on a table under the watchful gaze of Doctor Octopus, head of the Brain Trust. Spider-Man soon arrives and is able to free her just as the Roxxon building is attacked again. The pair quickly start to save civilians before they notice that Doctor Octopus is in peril. While Widow wants to leave him to die, Spider-Man appeals to her conscience and they save the villain. Rick Jones and the Human Torch arrive to tell them that the heroes of the Ultimate universe are joining together to take down Reed Richards (the Maker). Both of the spider-heroes and Doctor Octopus joins the group and takes the fight to the Negative Zone. Here Black Widow meets the Ultimates for the first time and after the battle, joins SHIELD at Carol Danver's personal request.

After the death of Peter Parker, Widow is one of the first to confront the new Spider-Man, Miles Morales. She continues to fight alongside the Ultimates, though she is growing more disenfranchised by the actions of the team. She eventually is forced to team up with Miles once again when SHIELD and Hydra have a massive battle. After the battle, she makes sure to return him home. Miles and Widow have a strained relationship and she keeps him distant emotionally until he considers quitting being Spider-Man. At this point, she speaks to him and reveals that she is Peter's clone. And while she can't be Spider-Man, she believes that Miles should be.

Miles, Widow, Cloak, Dagger, Bombshell and Kitty Pryde later join together to become the New Utlimates and battle the Roxxon's Brain Trust. It is at this point that the former Spider-Woman begins using the Black Widow moniker for the first time. She also begins a romantic relationship with Kitty Pryde at this point.

During the war with the Inheritors, Black Widow joins Kaine and an alternate Ben Reilly to investigate the home of the Inheritors.

After the reformation of the Multiverse, Black Widow returns to life and begins using the Spider-Woman identity once again. She joins the Ultimates with a resurrected Peter Parker in the Ultimate universe, who has become Spider-Man once again after Miles finds himself in the 616.