Who the Clix? Toxin 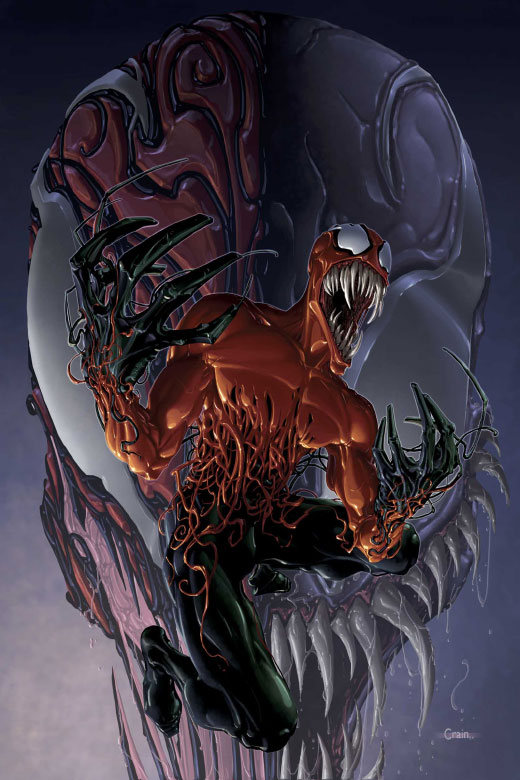 Carnage becomes disgusted and enraged when he realizes that he is going to spawn a new symbiote, Through their alien connection, Venom realizes that Carnage is getting close to spawning as well and hopes to reach out to his “son” and take this new symbiote under his wing. When Venom confronts Carnage, Carnage reveals that he intends to kill the symbiote before it can bond with a host and become strong enough to be a problem. Venom is determined to protect the offspring while also worried that, as it is the 1,000th in their line, it could be even more psychotic and violent than Carnage.

Patrick Mulligan, a New York City beat cop, happens across Carnage soon after the villain spawns his new symbiote. Unbeknownst to Patrick or Venom, the new symbiote attaches itself to Patrick. Carnage realizes this and intends to kill the pair before they become strong enough to fight back. Carnage attacks Patrick's family in his home which leads to the first manifestation of the Toxin creature, named so by Venom. Venom soon realizes that Toxin is going to be too much of a hero, like Spider-Man, and forms a temporary truce with Carnage to try and kill their descendant. Unfortunately for them, Spider-Man was able to find the trio and help Toxin fight off the older symbiotes. After the battle, Toxin tells Spider-Man all about his life and is encouraged by the hero to use this new situation for good. Still haunted by the drastic change in his life, Patrick leaves his life behind and dedicates himself to becoming a super-hero.

Though Patrick is able to keep the symbiote's fiendish thoughts at bay and battles several supervillains, the constant internal battle becomes too much. He tries to end his life by jumping in front of a train only for the symbiote to save his life at the last second. The symbiote works to convince Patrick that he wants to live, revealing that it is still young enough that it is not sure that it could survive the death of its host. After successfully capturing Razor Fist, even after the villain kills Patrick's father, Mulligan decides that he is strong enough to keep the symbiote in line. He returns home and shows his wife the symbiote so that she understands why he left so abruptly. Once home, he and the symbiote come to an agreement: the symbiote will not try to subvert Patrick's thoughts so long as it can be in complete control for two hours each night. But in those two hours, it cannot commit any murders or heinous crimes.

At an unknown point, Blackheart kills Mulligan and takes the Toxin symbiote captive. Blackheart intends to use a piece of the symbiote in a hellish ritual as well as bonding portions of it to clones of X-23. Toxin is stolen by Jack O'Lantern under orders from Crime Master. Eddie eventually follows the new Venom to the Crime Master's base in his crusade to kill all symbiotes only to be captured by Crime Master and forced to bond with the symbiote to become the new Toxin. Toxin then joins the Savage Six to fight Venom and is severely injured in the battle.

Brock, as Toxin, remains determined to find Venom and tracks it down only to be discovered by a group of creatures known as “symbiote slayers.” Toxin and Venom defeat the slayers and come to an agreement, with Eddie again becoming a “lethal protector.”

Toxin is eventually recruited into a task force led by John Jameson that tracks Carnage. Eddie serves as a soldier in it, with the Toxin symbiote kept only in cases of emergency. When Carnage gets the Darkhold and uses it to resurrect Cthon, Eddie ends up sacrificing the Toxin symbiote to defeat Cthon.