Who the Clix? Mongul (Father) 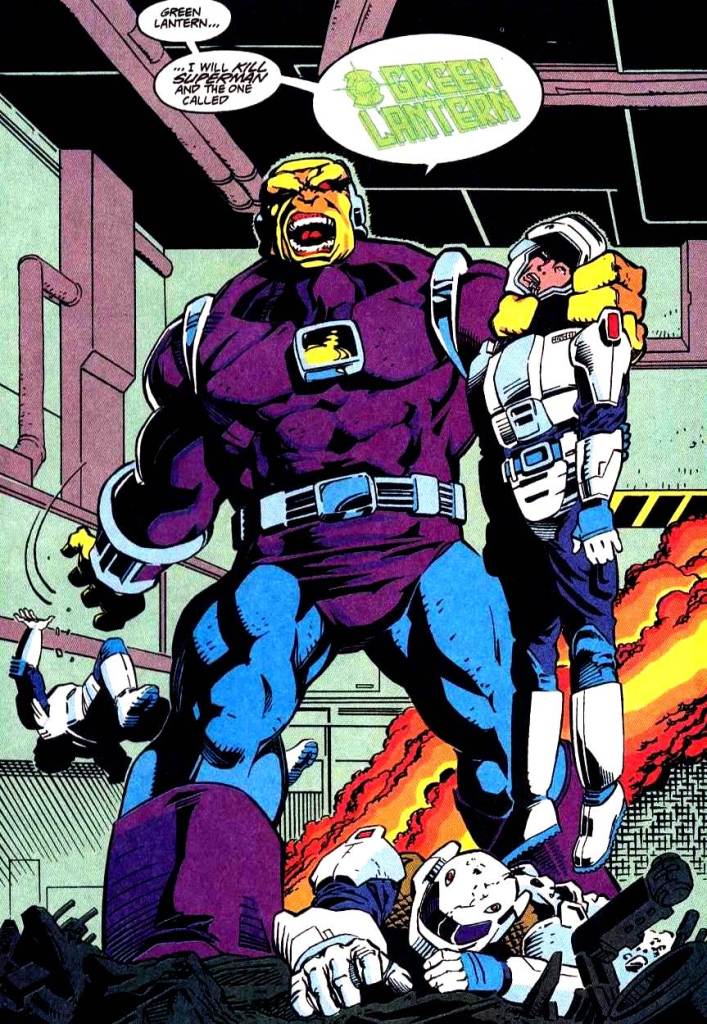 Mongul rules his people until a violent revolution ousts him. Mongul first runs afoul of Krypton's last son after kidnapping Lois Lane, Jimmy Olsen and Steve Lombard. Mongul uses his hostages to demand that Superman bring him the key that can activate Warworld. Superman obliges to save his friends' lives. Mongul activates the terrible planet and is linked psychically with it. He instantly tries to use his new weapon to destroy both Superman and Supergirl, but the mental strain is too much. Mongul is forced to retreat.

Mongul sets out on a path of galactic conquest, first attempting to conquer the home world of Prince Gavyn, Throneworld. He is then able to use Throneworld's mighty planet-destroying weapon to blackmail more planets into obedience. Superman is summoned to Prince Gavyn's, also known as Starman, aid and battles Mongul. Starman is able to disable the weapon and Mongul is once again forced to flee. Mongul attempts revenge once more by trying to use a captured Sun-Eater to destroy the Earth's sun, only to fall before the mighty Kryptonian once more.

Mongul eventually finds a manner of satisfaction, sending Superman a Black Mercy on his birthday. This plan would work, if not for the intervention of Batman, Robin and Wonder Woman. Mongul himself ends up ensnared in the Black Mercy and dreams fondly of ruling the universe.

Mongul rules Warworld, forcing gladiators to battle for the entertainment of his citizens. Superman and Mongul first meet after Superman exiles himself from Earth. Warworld finds Superman floating half dead in space and Mongul quickly decides to place him in his arena. Superman is able to join forces with Mongul's champion and together, they overthrow Mongul and force him from Warworld.

The Cyborg Superman later captures and tortures Mongul, forcing the alien to aid him in turning Earth into another Warworld. The pair begin with Coast City, home town of Hal Jordan, destroying it in the process. The villains are eventually defeated, but at a great cost. For his crimes, Mongul is imprisoned. He quickly escapes though and seeks vengeance against Green Lantern. Once he finds the Green Lantern, however, he learns that he (Kyle Rayner) is not the same Green Lantern that previously defeated him. And this new Lantern's ring has no weakness against yellow, leading to Mongul's defeat and imprisonment once more.

Mongul is able to make another bloody escape, only to be stranded on a planet ravaged by a virus. Though he attempts to become a despot once more, the inhabitants succumb to the virus which ends up leaving Mongul completely alone except for two babies that prove immune.

Mongul later returns to Earth through unknown means and battles Wally West (as the Flash). Some time later, the demon-lord Neron attempts to raise a supervillain army by offering them all greater power in exchange for their souls. Mongul refuses the offer and threatens Neron. Neron responds by beating Mongul to death and taking his soul anyway.

Mongul is the descendant of generations of planetary rules. The young boy is cruel and obsessed with strength, even going so far as to kill his younger brother. His parents attempt to correct for this obsession and cruelty but this only results in a bloody war that destroys his family and leaves Mongul as the only survivor and unchallenged ruler.

Mongul then sets about building the Warworld and begins conquering countless planets and growing a mighty empire. This colonization brings him into conflict with the Green Lantern Corps several times. During this time, Mongul also fathers two sons. One that wants nothing to do with his father and the other that is the spitting image of him.

Mongul is eventually recruited into the Sinestro Corps but he decides to conquer it and rename it the Mongul Corps. This brings him into conflict with Sinestro and their battle results in Mongul's expulsion from the Corps.

After being defeated by Earth's champions, Mongul returns years later with a cunning plan to recruit a volunteer army of the Earth's young gamers. The Toymaster builds a new gaming device and tests it while Mongul again confronts Superman. Mongul makes a tactical retreat while humanity's rage grow and feeds his machines. Superman is able to turn this anger against Mongul and use it to once again defeat the alien invader. This time, Superman imprisons Mongul in the Phantom Zone. Mongul find his son Jochi and all of Warworld in the Phantom Zone. Disgusted by how soft Jochi had allowed Warworld to become, Mongul murders his son and reclaims his throne.

Mongul later manages to escape the Phantom Zone with Warworld and journeys to New Korugar to gain vengeance against Sinestro. Mongul battles Sinestro until the Apex League intervenes and drains the yellow power ring. The League explain how they were able to defeat Sinestro so easily, in hopes that it would deter Mongul. However, Mongul still battles them, attempting to claim Sinestro as his prisoner. Eventually, Sinestro is able to outsmart and defeat them all.

Mongul is eventually found and transformed by the Pale Vicar. He battles and defeats a Sinestro Corps empowered Black Adam. The arrival of the Saint Walker manages to turn the tide, as the combined Sinestro Corps is enhanced and able to overwhelm Mongul.

Mongul later returns to Warworld and accepts the challenges of all comers. After defeating the best that Warworld has to offer, Mongul is saddened. Realizing that Superman is his only true challenge, he swears to his son that Superman will be destroyed. During this oath his son, Mongul MDCCXCII rips out his father's heart from behind and becomes the new ruler of Warworld.