Who the Clix? Group Edition: The Marauders 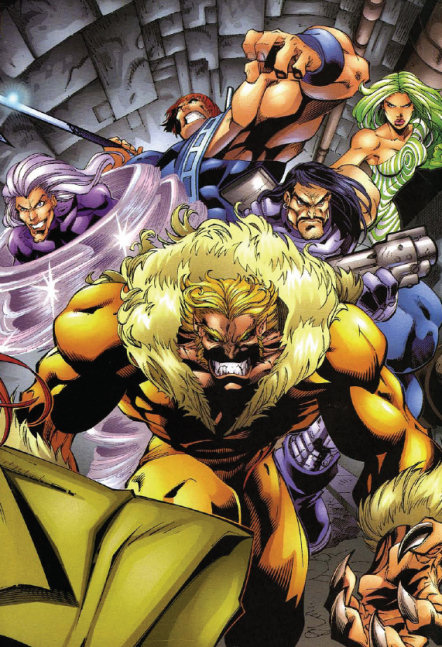 The Marauders first come to the attention of the X-Men after they slaughter most of the Morlocks that live beneath Manhattan. They continue to battle the X-Men, X-Factor and even Thor; these battles lead to the death of several of the Marauders, notably Riptide, Prism and Blockbuster.

Sabretooth later attacks Xavier's mansion while Malice possesses Dazzler only to later be driven out. The Marauders then attack Polaris, weakening her enough for Malice to possess her and assume leadership of the group. They then attempt to assassinate Madelyne Pryor.

During the invasion of Manhattan by demons from Limbo, the dead Marauders are suddenly alive and well. Many of them die again only to reappear alive and well. It is later learned that Sinister is able to clone all of the Marauders. Sinister also has a genetic marker in all of the clones that allows him to shut them down if they turn against him. Sabretooth's clone samples seem to be destroyed only for a clone of Sabretooth to later appear.

Gambit eventually admits that he organized the Marauders and led them to the Morlock Tunnels with good intentions. Once they began massacring the Morlocks, Gambit fled in horror only saving a young mutant named Sarah. Sarah later grows up to become Marrow.

Marauders later returns and attacks Providence in search of certain mutants. These Marauders include the original line up, Malice possessing Omega Sentinel, Lady Mastermind, Sunfire, Gambit and Mystique who have formed an alliance with the Acolytes Exodus, Random, Frenzy, Tempo and Unuscione. The list is of mutants or places that have information of the future and alternate timelines. The Marauders appear to kill Cable while also attacking Deadpool. They try to kill both Gateway and Bishop only to fail. They attack the X-Mansion in search of Destiny's diaries only to find fakes. Iceman and Cannonball try to defend the real diaries only for them to be destroyed in the battle.

The Marauders then search out the infant Hope, killing a number of Purifiers in Alaska before losing Blockbuster and Prism. They track Cable and the baby to Forge's Aerie in Dallas. Once there they defeat Bishop and seize Hope. They are among those that battle on Muir Island where Scrambler and Vertigo also die.

The Marauders are later reformed by the half-sister of Karma to get revenge on her father. They are eventually defeated. Soon after, Magneto begins hunting down all of the Marauder clones except for Sabretooth and Malice in vengeance for the Morlock Massacre. Each time he kills a clone, however, a new clone is activated. Though it takes time and determination, he kills every clone except for Scalphunter whose arms and legs he cuts off. He then is able to prevent the activation of new clones and modifies their programming so that he can activate them for his purposes.

Magneto finally reactivates the Marauders after he begins rebuilding Genosha. SHIELD attempts to interfere forcing Magneto to use the Marauders as a distraction before retreating to avoid all out war. Magneto begins using the clones as new Acolytes in his missions.

Mr. Sinister forms a new team of Marauders made up of Aries, Azimuth, Chimera and Coda. He sends them after Nightcrawler, hoping to use Nightcrawler in a new experiment.