Who the Clix? Angela 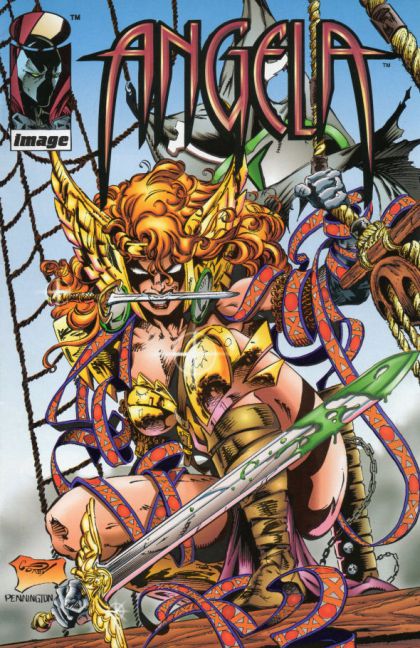 Artwork and character are copyright and trademark their respective owners; used under Fair Use

Angela is an angel and a bounty hunter (like most angels) working under the auspices of Heaven to oppose the Hellpawns of Malebogia. She attempted to kill Spawn upon their first meeting to collect the bounty on him, but was defeated when he was able to activate her lance and get sent to another dimension (where he met Marvel and DC characters in "prison" while being guided by Cerebus).

Later Spawn came to her aid during her trial in the portion of Heaven where the angels live and operate, to testify that she had permission to kill him. Because of Spawn's escape, the lance never returned to the armory and one of Angela's rivals was able to remove the records showing her signing out the lance and accepting the original bounty.

Naturally, the trial went a bit sideways as Spawn's costume did not react kindly to be anywhere near Heaven and the two escaped to Earth. During one of the nights in hiding (while Spawn regained his strength and Angela was cut off from her angelic powers) it is presumed the two had a sexual encounter.

Eventually, Angela's friends are able to clear her name. However, after her recent experiences, Angela decides to become a freelance bounty hunter (something no other angel had ever done).

Quite a while later, Spawn descends to Hell to face his maker. He is almost defeated by Malebogia until Angela arrives and drives a angelic lance through the devil. The two share a moment of victory which is cut short by the not defeated Malebogia driving Angela's own lance through her chest. Spawn proceeds to decapitate Malebogia in revenge and returns her body to the angels, who agree to lay her to rest even though she had "fallen from grace."

After the Age of Ultron story concludes, Angela is revealed to have been pulled from Heaven as a result of damage to the multivariate. In a combination of rage and confusion, she charges towards the Earth from outer space only to be intercepted by the Guardians of the Galaxy.

During the Original Sin story line, it is revealed that she is the daughter of Odin and sister to Thor and adopted sister to Loki. She was "killed" as an infant during Asgard's war with the Angels of the Tenth Realm, also known as "Heven". This crime resulted in Odin severing the tenth realm from the other nine as "punishment" for their attack. Thor learns of his sister's existence when exposed to the secrets of Uatu the Watcher's eye by the Orb, and he returns to Asgard to confront his mother about his sister's existence. He subsequently travels to the tenth realm with Loki to learn more about his sister.

Angela, who is traveling with the Guardians of the Galaxy, is attacked by a band of space pirates called Warpjackers. Loki telepathically reaches out to Angela during the ensuing battle to tell her that the portal to Heven is open and she can return to home. Angela returns to the gates of Heven only to find Thor battling the guards there. Angela is able to easily overpower Thor as he is exhausted from the previous battle against the guards. The Queen of Angels tells Angela to bring Thor to her. Once the pair arrive, they find Loki, who appears to be female, has aligned herself with the Angels.

Loki leads an Angel fleet to Asgard in order to attempt to destroy it. Thor escapes and battles Angela once more until Odin, who Loki had summoned, arrives and recognizes Angela as his daughter, Aldrif. The angel that had been meant to dispose of the baby Aldrif's body found the child alive and secretly raised her as an Angel. Once the Queen of Angels discovers this she pardons Angela but exiles her from Heven because she is an Asgardian and member of the Asgardian royal family. Odin tries to tell Loki, Thor and Angela how much he loves them but Angela still decides to explore the other realms on her own.

Some time later, Odin and Freyja have a new daughter. Angela and her lover Sera break into Asgard to kidnap the child, who is possessed by the spirit of Surtur. Odin dispatches Thor to rescue his daughter, unaware that Angela and Sera intend to take the baby to Heven to be cleansed of Surtur's spirit. Once in Heven, Angela throws the baby into the stalled engines of the realm. The engines draw Surtur's spirit out, which reignites them. This seems to finally allow Angela and Heven to make a lasting peace.

Angela and Sera return the child to Odin, only for Angela to learn that Sera is actually Malekith the Accursed. The real Sera remains in Hel after being killed in battle. Angela travels to Hel and asks Hela to restore Sera to life. Angered by this, Angela seeks the aid of Sera and Leah, Hela's handmaiden, to conquer and become the new queen of Hel. Angela succeeds and immediately releases all the souls of dead angels enslaved in Hel and restores Sera to life. Her work done, she abdicates the throne and returns to Earth with Sera and Leah.

When the Avengers create a black ops team called Strikeforce, Angela joins to lead it alongside Blade.