Who the Clix? Skrulls 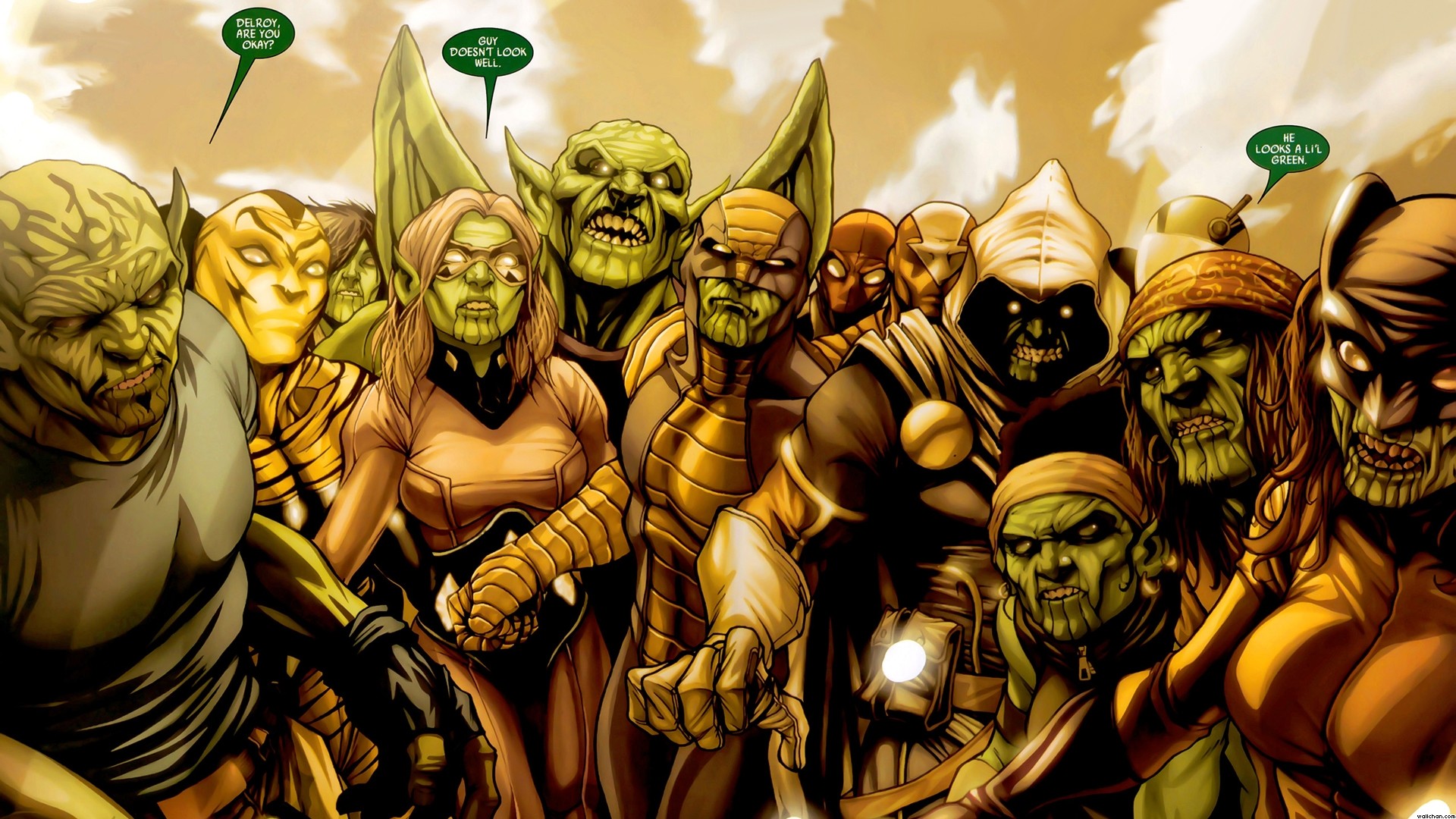 The Skrulls, like so many races in the Marvel universe, are a result of Celestial experiments. Three races came out of the experiment and the Deviant branch, the widely known shape-shifting Skrulls, became the dominant species. The Deviant Skrulls set about destroying the other two species of Skrulls leaving only two survivors. Kly'bn and Prime Skrull. Kly'bn became husband to the leader of the Deviant Skrulls and Prime Skrull lives to this day. After the genocide, the shape-shifting Skrulls further split into two more species: Skrulls and the magical parasitic Skrulls that call themselves Dire Wraiths.

The first iteration of the Skrull empire is a fairly peace loving group of merchants. They freely share their technology with races that the Skrulls feel can handle it and often will shape shift to resemble these new races in order to make dealings easier. The Skrulls eventually are able to develop long distance space travel and conduct a great tour of the universe. This tour eventually leads them to Hala, home of the then-barbaric Kree and peaceful Cotati. Both races are sent out to different planetoids for a year in order to prove themselves worthy of representing Hala to the Skrull Empire. It is during this time that one group of Kree are taken to the Earth's moon and build the lost city on the blue area of the moon. During the contest, the Kree feel that the Cotati are going to win and decide to massacre their opponents. When the Kree tell the Skrull delegation this, the Skrulls are horrified and denounce the Kree. In response, the Kree massacre the Skrull delegation and take their spacecraft. The Kree then reverse-engineer the craft, gaining a great technological leap.
As a result of the great distance between Hala and Skrullos, the Skrulls do not learn of the Kree's treacherous actions until the Kree arrive near the Skrull homeworld and promptly attack it. The Kree-Skrull War that follows lasts thousands of years and radically transforms the peaceful merchant Skrulls into the more familiar modern vicious warrior Skrulls. It is also during the Kree-Skrull war that the Skrull throneworld is moved from Skrullos to Tarnax IV. Technically, the Kree-Skrull war continues to this day, with only relatively short periods of cease fire.

The Skrulls interest in Earth arises when they discover a space warp that links their throneworld with Earth, with a near identical space warp to Hala also located near Earth. Because of this, the Skrulls wish to conquer Earth but are hesitant to perform a full scale invasion, lest the Kree find out. As well, the superhumans of Earth propose a hostile force against any invasion. Instead, since 1958 the Skrulls have sent occasional scout warriors to Earth to try and impede its progress. These scouts are the Skrulls that attempted to sabotage the space programs of Earth, that battle the Fantastic Four, and that face Captain Mar-Vell (of course, a Kree warrior himself).

Eventually the Watcher attempts to end hostilities near Earth by forcing a duel between champions of each race. However, after a year of battle, the duel remains a stalemate and is therefore abandoned. The end of the first Kree-Skrull war ultimately comes with the great destroyer, Galactus. His then-herald, Nova, destroys the Skrull fleet before Galactus himself devours Tarnax IV. Billions of Skrulls, as well as the entire ruling class of Skrulls, are killed. The Empire is fractured into civil war as hundreds of governors proclaim themselves the next Skrull Emperor.

One of the would be emperors develops a gene bomb that can nullify the Skrulls' shape-shifting ability in an attempt to bring the rest of the empire under his thrall. Unfortunately, the bomb explodes and all affected Skrulls are trapped in whatever form they are in at the time of the explosion. Feeling exposed and vulnerable, Skrull factions attempt several desperate plans such as: kidnapping Galactus' herald in order to force the world devourer to destroy Kree planets; attack the Kree to show military strength to the Celestials; and trick the Silver Surfer into attacking the Badoon, allies of the Kree. Eventually, Empress S'byll takes command of the various Skrull factions and with the help of the Silver Surfer, has her shape-shifting abilities restored. Then, as a female Skrull, she is able to restore every Skrull she can make skin to skin contact with. With the promise of their lost power, S'byll is able to take full control of the Skrull race.

Even with a reunited empire and restored powers, the Skrulls still suffer heavy losses from the Kree. Desperate, the Surfer and S'byll go to Hala alone and expose a Skrull that is manipulating the Kree for her own ends. A peace treaty is reached that the Skrulls eventually break, having become a true warmongering race.

The Skrulls eventually develop “Warskrulls,” Skrulls that are able to gain the super powers of those they physically copy. These Warskrulls infiltrate the Shi'ar empire and begin wreaking chaos across its controlled worlds. The combined might of the X-Men and Deathbird eventually stops a Warskrull that is impersonating Professor X and controlling Lilandra.

A Skrull named Paibok attempts to invade Earth via infiltration. He uses a Skrull named Lyja to impersonate Alicia Masters. However, the plan goes awry when Lyja instead seduces and eventually falls in love with Johnny Storm. Lyja eventually helps the Fantastic Four rescue the real Alicia Masters but seemingly dies in the process. Instead, she was simply in a comatose state. Paibok and Devos the Devastator awake Lyja and give her the power to fly and fire energy blasts, giving Lyja the moniker “Lyja the Lazerfist.” The three eventually attack an isolated Human Torch at Empire State. Lyja's feelings for Johnny continue, however, and she again betrays her brethren to help the Fantastic Four.

A subset of Skrulls eventually evolve similar to mutants on Earth, gaining greater powers than simple shape-shifting. These Skrulls are hunted as Deviants by the Empire and eventually led and taught by Professor X as Cadre K. During Annihilus' Annihilation Wave invasion, the Skrull Empire is again decimated. Battered and broken, new Queen Veranke attemps to finally invade Earth by replacing key superhumans with Skrulls. After the events of House of M, Veranke feels that Earth is sufficiently weakened to be invaded by the main assault force. However, humans prove resilient once again and are able to repel the Skrull invasion, leading to the death of Queen Veranke and many of the Skrulls' “gods.”

During the Builders' conquest of the universe, the Skrulls are reduced to even fewer numbers. The remaining Skrulls, under the leadership of Kl'rt, help the Shi'ar and Earthlings defeat the Builders and eventually settle on Tarnax II.