Who the Clix? Molecule Man 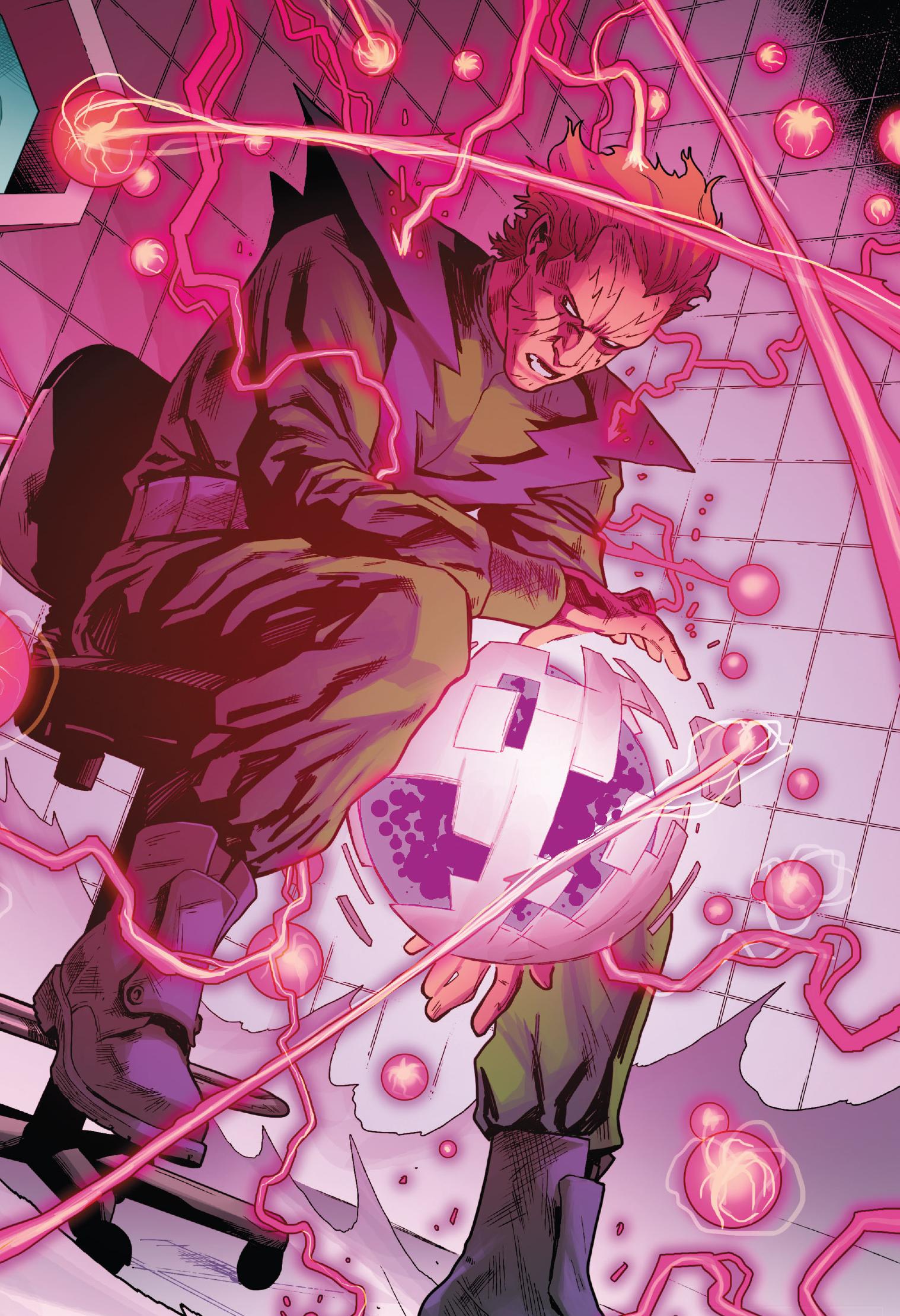 Owen Reece began life as a timid child from Brooklyn, New York and grew into a bitter and lonely man after the death of his only friend: his mother. He works as a lab tech at a nuclear plant owned by the Acme Atomics Corporation. One day, he accidentally activates a particle generator and is bombarded with a powerful but unknown radiation. This radiation apparently activates his latent psionic powers and amplified them so that he can manipulate matter at the molecular level. His face is also disfigured with lightning bolt markings. Reece begins calling himself the Molecule Man.

This experiment also apparently tears a tiny wormhole between our dimension and the home dimension of the Beyonder. This draws the Beyonder's attention to Earth and he observes it silently for years.

The day after the accident, Owen's boss attempts to fire him but struggles to remember Reece's name. Infuriated, Reece encases the president in ice. Fulfilled by the vengeance, Molecule Man decides to take revenge on the whole world as a super villain. Still, his own self-doubt and mental trauma hold him back from fully exploring his power and he believes they come from a simple metal wand.

Afraid of what Owen could do if he ever realized his full power, Uatu the Watcher alerted the Fantastic Four to this new super villain. They are easily dispatched by Owen at first, until Reed hatches a plan. Along with the help of Ben Grimm's girlfriend Alicia Masters, they cover themselves in plaster to appear like statues. They lure Molecule Man to Alicia's apartment and trick him into believing he can't use his powers on the simple statues. This shocks Owen and he absent mindedly drops his wand, which Mr. Fantastic quickly grabs. Without his wand, Owen believes he is powerless and is transported to a inter-dimensional prison by Uatu where time passes faster.

Left alone for long enough, Reece creates a human construct and is able to give it consciousness. He raised the construct as his own son and fashioned a wand for the boy. Before Reece dies, he transfers his mind and powers into the wand. Without the trauma and limitations of Owen Reece, this construct is able to escape the prison and returns to earth as the new Molecule Man. He battles both the Man-Thing and Thing in an attempt to avenge his father. However, the wand really is the source of his power and once it is taken from him, he simply evaporates.

Owen Reece lives on in the wand, however, and is able to exert mental control over any who hold it, including Cynthia McClellan, Aaron Stankey and even Mister Fantastic.

Owen eventually recreates his own body, along with the facial scars, and transfers his mind and powers back into it. Resurrected, he threatens to destroy the world until Tigra intervenes and convinces him to see therapy. The therapy is effective and Reece appears to reform his ways. He wants to only find a healthy loving relationship, true friendships and a safe home. However, Reece is soon pulled to Battleworld by the Beyonder in order to aid the super villains in the first Secret War.

Dr. Doom is able to sway Reece's heart enough to join the villainous crusade to defeat the heroes also on Battleworld. During this time he meets and falls in love with Volcana. Soon, Doom is able to steal the power of the Beyonder but this makes Reece feel abandoned and so he threatens to kill Doom. Doom, feeling beyond Reece's power, helps the Molecule Man remove his own mental blocks and begin to achieve his full potential. This brings peace to Owen and using his new power, he returns to Earth along with the other villains and most importantly, Volcana. The pair settle down in a quiet suburb and Owen again begins working at an atomic plant.

The Beyonder, feeling safe in his victory, decides to not just assume mortal form but actually become a mortal. As such, he builds a machine that will drain his power, turn him into a mortal baby and then return the power to him as well as aging him to an adult. The heroes discover this and Molecule Man makes the terrible decision of killing the child before it can destroy the multiverse. He destroys the machine, killing the infant Beyonder and redirects the Beyonder's power back into the Beyonder's dimension, where a new universe was born.

Greatly injured, Molecule Man and the Silver Surfer join their power together to repair the damage to the planet that the Beyonder had done. Sure that the other heroes would always be suspicious of him, Owen pretends that this exertion has burned out his powers and so he returns to a quiet suburban life.

Reece goes on to have several misadventures. He helps create Kosmos, he battles the Klaw and is separated from Volcana, he is used by the Puppet Master to battle Aron the Rogue Watcher. His “dark side” escapes and manages to take on a brief life of its own as it chases down Kosmos in an attempt to take revenge against a resurrected Beyonder. The heroic Molecule Man joins with Kubik to defeat and reabsorb his darkness.

Doc Samson accidentally finds Molecule Man and leads Owen to believing he is being stalked. Owen kidnaps Doc to find out what is going on until She Hulk intervenes. They make peace and Owen reveals that he and Volcana are on a trial separation that has left him feeling depressed. Samson helps him through this and Molecule Man seems to reconcile with his beloved.

Left alone in Colorado, Owen begins to go mad. He is unable to tell the difference between fantasy and reality. Norman Osborne sends his Dark Avengers after him but they are quickly defeated. Victoria Hand is able to reason with Owen, convincing him to undo the damage he has done and return to a peaceful life. If he does that, she promises he will be left alone. Sentry hears none of this and attacks Owen, only to be destroyed. Sentry is able to reform himself and demands Owen do exactly what Reece had promised Victoria he would do. Owen does and Sentry seemingly disintegrates Owen in return.

Owen eventually reforms himself and is imprisoned by Dr. Doom. Doom has discovered that Owen's own energy matches the beacon of the Mapmakers. Doom hopes to use this to find the origin of the Incurisions and stop the decay of the universe. Instead, the pair discover Owen's true origin and purpose. Molecule Man exists across the entire multiverse, and this shattering of one mind across all the universes results in his madness. Molecule is intended as a multiversal bomb or reset button. If a Molecule Man dies, his universe dies with him. Owen demonstrates this by killing another Molecule Man which, inadvertently, begins the Incurssons. Owen convinces Doom that he needs to be made whole by killing other Molecule Men in order to stop the Beyonders.

Unknown to all but Doom and Molecule Man, they were retaining the bodies and an aspect of each Molecule Man's power. Eventually, they transport every one of them to the “end of the multiverse” alongside Dr. Strange. There, the three confront the Beyonders and as the final incursion occurs, they send the bomb back into the Beyonders dimension, seemingly killing them.

In the remade Battleworld reality, Molecule Man is the battery that holds the Beyonders' power and channels it to God Emperor Doom in order to rule over the patchwork world. The surviving Illuminati and Cabal members eventually attack Doom's castle and 616 Spider-Man alongside Miles Morales Spider-Man discover Molecule Man. Molecule Man asks if either of them have any food and Miles offers him a cheeseburger. Owen is very grateful for the sustenance and assures him that he is in the young man's debt. The Spider-Men tell Reed and the Maker about Molecule, leading the two Richards to the chamber. Maker makes his inevitable betrayal but is transformed into a pizza by Owen. Doom suddenly realizes what is happening and bursts into the chamber to battle with Reed. To keep the fight fair, Owen strips Doom of his power before observing. In the course of the fight, Doom admits that Reed would have been a better caretaker of the Beyonders' powers even though Reed didn't have the determination to steal it. Based on this, Owen grants his power to Reed which undoes Battleworld.

Reed resurrects his family and asks for Franklin's help. Franklin's powers and mind are enhanced by Owen and they begin rebuilding the multiverse with a new Molecule Man in each one to act as an anchor. This also helps Owen regain his sanity, as they are no longer bombs and thus not poisoned with a literal self-destructiveness. Owen also rewards Miles for the cheeseburger by resurrecting Miles' mother and merging their lives and histories with that of the 616 Earth.

Owen accompanies the Richards family and Future Foundation on their tour of the newly recreated Multiverse. He is one of the first to notice that Franklin's powers are growing weaker. When the Griever first attacks, she kills Molecule Man first and has her Endlings feed on his power.