Who the Clix? What Else Edition: Earth X 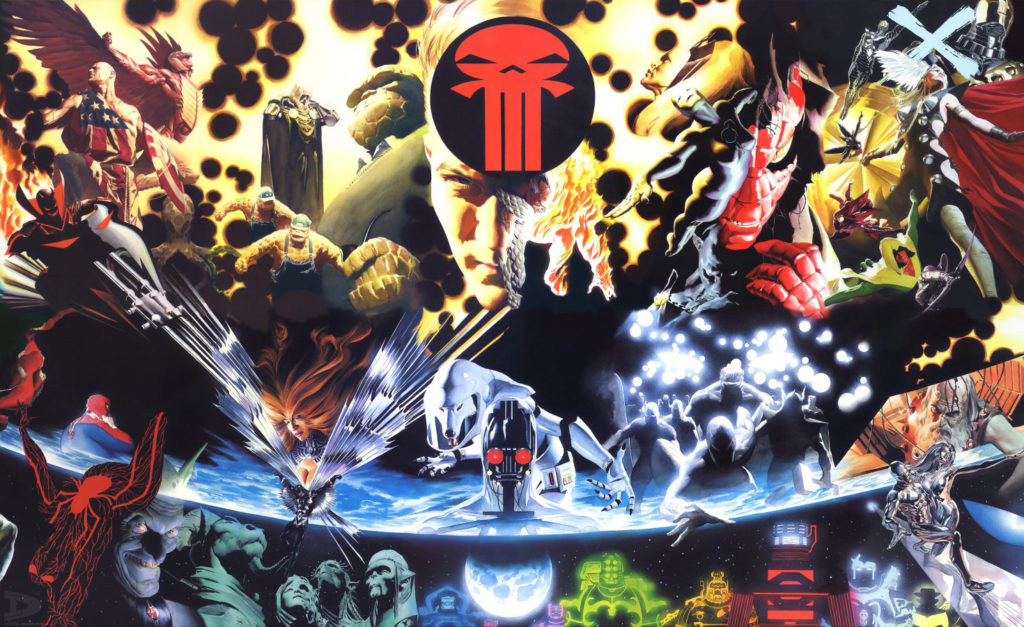 The earth is one of many planets implanted with a Celestial egg and seeded with life to protect that planet. Roughly ten years after the heroic age, Black Bolt releases the Terrigen Mists in Earth's atmosphere and unknowingly activates the latent gene in all of the humans that are descended from the Kree's experiments. Before doing this, he blinds Uatu the Watcher so that he cannot observe these events. After the deed is done, Black Bolt and the Inhuman royal family leave Earth.

Needing to continue in his work, Uatu teleports Machine Man to the Moon to watch and relay what is happening. Machine Man has given up being a hero and lives as a normal man. Unsatisfied, Uatu burns off Machine Man's artificial skin and only refers to him as X-51. They openly show disdain and distrust for each other as Uatu is sure that the age of heroics on Earth has ended.

Captain America is finally pushed to the breaking point and kills the Red Skull. Disgraced by his actions, he leaves the Avengers. Reed Richards attempts to build a worldwide network of vibranium generators to supply inexpensive power for the world. One of his scientists falls into the reactor and causes a massive chain reaction that destroys the experiment. She somehow survives the fall and is able to manipulate the vibranium that now encases her body, calling herself Iron Maiden.

Benny Beckley's telepathic powers are activated by the mists, which instantly kills nearly all of the world's telepaths. The young boy soon begins calling himself The Skull. Dr. Doom and Namor attack the Fantastic Four, once again. An explosion kills both Susan Richards and Dr. Doom as Namor kills Johnny Storm. Enraged by the death of his mother and uncle, Franklin Richards curses Namor so that half of his body bursts into flame when it comes into contact with the air. This forces Namor to retreat to the ocean. Devastated by his losses, Reed dons Doom's armor and keeps guard over Castle Doom in Latveria.

The Absorbing Man asborbs Ultron and murders the Avengers. Absorbing Man is ultimately incapacitated by Vision with a computer virus. To try and stop the virus, Absorbing Man turns to stone at which point an enraged Vision shatters him and distributes the pieces to world leaders so he can never be reassembled.

Norman Osborn uses gene engineering to create the Hydra, a parasitic hive mind, and uses this threat as a rally to become President of the United States. Once elected, he grants Tony Stark political asylum in exchange for Iron Avengers to battle the Hydra. Tony is one of the few remaining non-mutated humans, as he has remained in hermetic isolation.

Just as Loki finishes one of his latest pranks, having Odin transform Thor into a woman, he stumbled on a cosmic conspiracy by the Celestials. All life seeded by Celestials, in order to protect Celestial eggs, has the potential to gain fantastic powers. If such life were to unite, these beings could potentially rival the power of the Celestials. As such, the Celestials went further and transformed more races, making them believe that they are gods or devils. And so long as they believe that, they will use less of their potential power and keep the planet side species in line. It is here that Loki discovers that he, and all the Asgardians except Odin, are actually incredibly advanced aliens trapped into forms that match the myths of the Norse.

Captain America and his new partner Redwing discover that the Skull is gaining a massive army with his telepathy. While Capt. is able to resist the Skull's powers, Redwin succumbs and Capt. is forced to retreat and regroup. The Inhuman Royal Family return and contact Reed Richards in an attempt to locate the lost Inhuman nation. Reed uses Cerebro to help them, only to discover that Black Bolt had been behind “plague X”. Once the Skull reaches New York, Captain America and his new allies are powerless against him. The Skull becomes distracted, however, and Capt. takes that moment to attack and kill the Skull. While the victory is cold comfort, it is also short lived. The Celestials has returned to Earth and it is time for the egg to be hatched. Which will, of course, result in the death of everyone on Earth.

Loki leads an army of Asgardians against the Celestials as Black Bolt sacrifices himself to scout across the universe for Galactus. It had been realized that Galactus was devouring planets in order to destroy the Celestial eggs inside and keep the cosmic beings from growing too numerous. Tony Stark and the Iron Avengers battle the Celestials, but Tony ultimatley loses his life. Galactus is able to arrive in time and battles the Celestials present, killing several of them. The remaining Celestials flee, which allows Galactus to convene with Earth's heroes. He devours the Celestial egg in the Earth's core but in a more controlled manner that leaves the Earth intact. Before leaving, Reed requests that Galactus removes his helmet, which Galactus agrees to. Reed thanks Galactus but does not remind him that the devourer of worlds is actually Franklin Richards, his own son. The boy that had agreed to use his powers to become Galactus after the Fantastic Four was forced to kill the original, once they realized that the cosmic balance needed Galactus.

With the day saved, X-51 gloats over Uatu only to come to a shocking realization. The Celestials had failed to stop Galactus' birth and so he had sworn to act as a balance to them. Uatu's true purpose was not to chronicle the tales of the heroes but instead to watch over Celestial eggs and help them be born. X-51 leaves Uatu deaf and bline on the moon and decides to aid Galactus in his work by destroying all the Celestial eggs. Reed converts his vibranium network into “Human Torches” and hopes to burn off the Terrigen Mists in an effort to return humans to the planet.